Blossom in the Air Show in Belgium 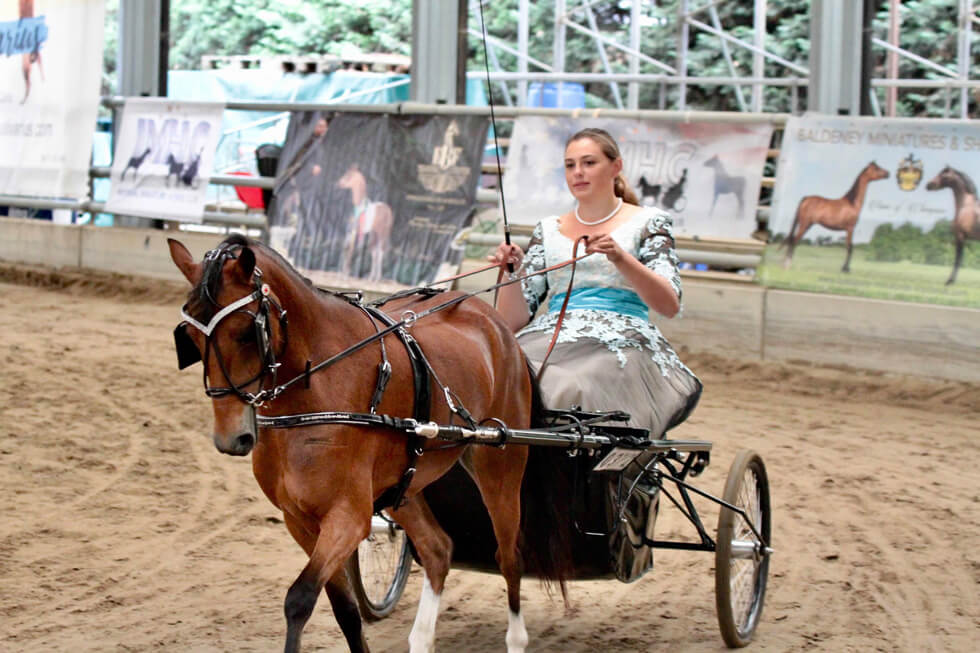 The only miniature horse show for us in this year was the “Blossom in the Air Show” in Belgium. Originally this show was supposed to take place in the spring. Due to the Covid-19 pandemic, it was then rescheduled to the last weekend in August. So the horses had a much longer preparation time, which certainly had its good points.

It was the first show in Europe for Wild Style (Michigan’s Wild Style). This 4 year old Modern mare is co-owned by Sophie and me. We bought her in late July 2019. Until her arrival over here, she had been trained the US way which takes a lot of getting used to for Europeans and especially for Germans who are used to classical dressage. After arriving in France in November, she was switched to a more horse-friendly driving style. In plain language, that meant: everything back to the beginning. For months she was worked mainly by in-hand dressage and ground driving. She is now moving in a beautiful posture, without opening her mouth or taking her tongue over the bit.

At the show she was the only horse in her class. So her driver Lea Tomulic (for her it was also a premiere) had enough time to prepare and focus exclusively on Wild Style. The two of them did a great job and Lea looked super chic in her dress!

Jules presented Wild Style in Halter and Liberty in his usual professional way and they both did a great job. We had to enter Wild Style in Classic since there were no Modern classes offered. As a Modern Shetland Pony, she doesn’t actually belong into Classic. But sometimes you have to take what you can get and we decided to use the opportunity as an exercise and test run for upcoming shows.

Wild Style was not the only one of my horses at the show. Fleurie (Modello STR Bailamos Firenze) and Princesa (EBF DelSastre Mi Princesa Roja) traveled the long way to Belgium and were beautifully presented by Veronika. For little Princesa it was the first trip abroad and also the very first show of her life. I may have mention before that patience is not exactly one of her virtues, but she has improved a lot in that regard. And she did her job really well for the first time.

In the moments that really mattered she decided to stand still and behave. She was placed first by the judge over the other mares. At just 29 inches she was by far the smallest horse in her class. The result of their first show is impressive: AMHR Mare Junior Champion and AMHR Mare Grand Champion! We are very proud of this tiny girl!!

Fleurie wasn’t really into it this time in her driving class (Western Country Pleasure Driving). Maybe the banners were too colorful for her, the rain on the arena roof too loud or the competition (the beautiful Albakan) too confusing. But at the age of 4 not everything has to be perfect and every show also serves as an exercise.

However, thanks to 4 weeks of diet and exercise we had been able to get her back into shape and get rid of the “corona figure”. She did make us proud in her halter class and won Reserve Supreme champion :-).