Success at the Equuspirit Show 2019 in Belgium 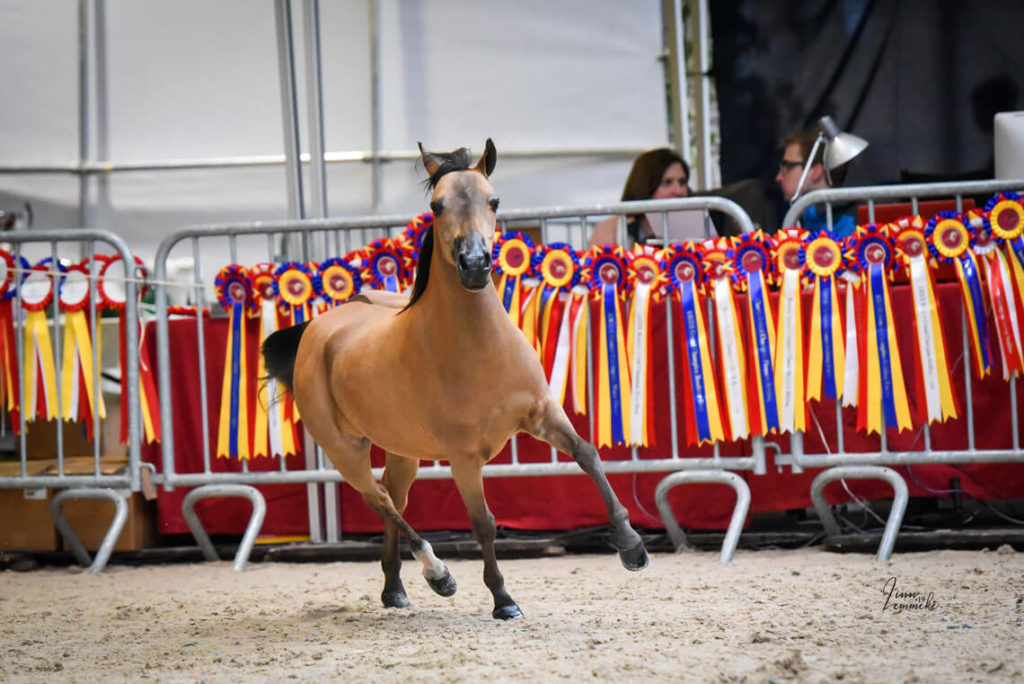 This season’s first show for our miniature horses was the Equuspirit Show 2019 in Belgium on April 27 and 28. The 2 day show offered a variety of approved ASPC/AMHR classes. In addition there were non-approved classes for miniature horses of all breeds. The Equuspirit Show is well established not least to the perfect organization and friendly atmosphere. It’s no surprise the number of entries is growing every year. This year it was said to have more than 130 entered horses!

Fleurie (Modello STR Bailamos Firenze) had her first entry in the very first class of the show, the Hunter class. This is an in-hand class where the horses have to pass over a number of jumps. They are being judged on style, manners and way of going. And of course they are supposed to jump in the correct order and without making mistakes ;-). Our little mare did quite well, only the last turn was a bit too narrow. Therefore she stopped in front of the last jump and had to try again. All in all it was not bad and we are happy how she did in her very first Hunter class ever :-).

Another first time was her debut in Western Country Pleasure Driving. During the last winter Fleurie was broke to drive and is still a bit green, but Veronika felt she was safe enough to try in the arena. It still was a good thing she was alone in her class and thus less distracted. Apart from getting a little spooked by some spectators opening a bag of chips with a lot of noise she did well and made a pretty picture.

First time for Gem and Monia in Halter Amateur

This year we are lucky to have found a suitable amateur handler for Gem and possibly Fashion, too. Monia Wauters from Belgium made her debut showing Gem in AMHR Amateur Mare Over. Even though she could only practice very few times and didn’t really know Gem they were successful, winning Amateur Reserve Grand Champion!

Huge Success for Fashion and Gem

The Liberty class was the last class on Saturday. Here the horses are being shown on the lose and you can bring your own music. This class is supposed to show the natural beauty of the horse. Judged are style, grace, elegance, movement, way of going and ease of catching. The horses are required to demonstrate both trot and gallop. Gem was not in her best form, probably due to a minor injury during transport and the classes she already had done. Fashion on the other hand gave everything she had and just floated in the arena. And also the catch – the biggest hurdle with her – went well within the given time frame. She won first place, and the beautiful “Dakota” owned by Sophie came in second.

On Sunday we had halter class after halter class for the mares. In AMHR Model Mare, 2y and older, Over Fashion and Gem came in 1st and 2nd – a great start for the day. Fashion proceeded with winning 1st place in AMHR Two Year Old Mare over 33 up to 37. and winning AMHR Junior Champion Mare Over!

Gem was shown by Sophie and did equally well. She placed first in her class (AMHR Aged Mare 3 & Older Over 34 up to 38). In AMHR Mare Grand Champion & Reserve  we had it all! Fashion won Grand Champion with Gem winning Reserve Grand – what a huge success!

Excitement in the driving classes

This show was Jules’ debut showing Gem in Country Pleasure Driving and Roadster. After going back to basics and working on the foundation all winter long, we all were excited to see if the countless hours spent walking behind and next to the horse would pay off.

Due to the tight schedule there was almost no time for warm up before Roadster. This and the blaring music mage Gem literally fly into the ring. She performed some really fancy Ninja moves but Jules kept his cool and was able to stop her against the rail. Even watching from home gave me almost a heart attack but luckily Gem calmed down. The judges were nice enough to let her stay in the ring and continue the class but of course without placement. Things went much smoother in Roadster Stake but we now knew for sure Gem really needs her warm up time and doesn’t take well to short cuts.

Luckily there was plenty of time before Country Pleasure Driving. Jules and Gem entered the ring looking beautiful but we did not expect much against the champion horse from Denmark. Gem performed much smoother than in Roadster and did exceptionally well with changing from working trot to country pleasure trot and vice versa. Much to our surprise and joy this was what made her place first! What a terrific job from Jules and Gem!!

Last but not least Fashion had qualified to show in AMHR Halter Champion of Champions Over. Again we did not expect anything since it rarely occurs that a youth handler wins over a professional trainer. But even getting this far was a huge achievement in itself. The judges took their time with announcing the winner and we all held our breath, waiting for the results. And the AMHR Halter Champion of Champions Over was …. Little Kings In Fashion!!

Goosebumps all over!! It’s hard to believe that this little mare was crowned Champion of Champions when only a couple weeks earlier still sporting her winter coat she did not look like she was ever going to win something in Halter. Jules presented her so well in all her classes and she did exceptionally well. Unfortunately we don’t have any photos yet of her and the stunning flower sash she won. But thanks to (the very excited) Sophie we can at least share a little video, flowers and national anthem and all ;-).