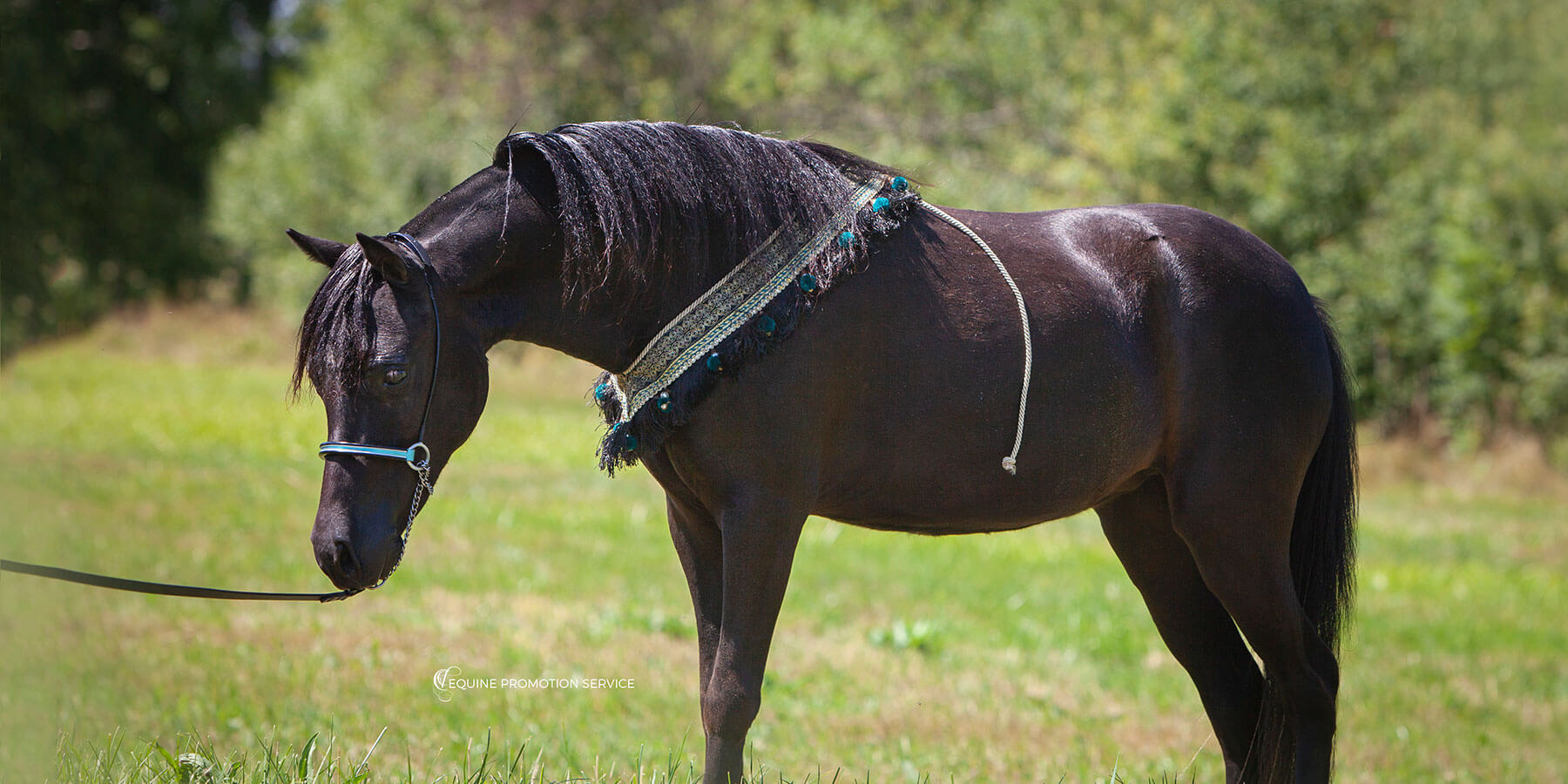 What is an American Miniature Horse?

The American Miniature Horse is the horse for everyone!

Miniature Horses are very economical to keep. Feeding and taking care of them costs about a fourth of the amount you would have to spend on keeping an average sized warmblood horse. Except for riding, there is a multitude of activities you can do with an American Miniature Horse.

They are shown throughout the world in halter and performance classes. Halter classes are conformation classes. They are judged by which animal comes closest to the Standard of Perfection as determined in the respective rulebook. Performance classes include hunter, jumper, obstacle in-hand as well as showmanship and costume classes. In addition there are many different driving classes as well, depending on the horses’ type, style and way of going.

Larger Miniature horses can be ridden by small children. Small Miniature horses on the other hand can be perfect therapy animals if they have the disposition to go along with. Miniature Horses are the perfect choice for people who can’t or won’t have big horse anymore, due to age or health issues or lack of space. For these individuals the American Miniature Horse can be the ideal companion and offer activities that would otherwise not be possible anymore.

Smart, loving, easy to train and easy to care for, miniatures are great horses for young and old, experienced or novice, physically sound or handicapped. The American Miniature Horse is the horse for everyone!

Miniature Horses have purposefully been bred by European Royalty throughout hundreds of years.

History of the American Miniature Horse

There is a multitude of colorful myths concerning the origins of the American Miniature Horse. Most of them were created as a means to set the breed apart from other small pony breeds and turn them into something special and unique.

In the USA, small or midget ponies were not called miniatures until the AMHR was founded in 1971. Naming them Miniature Horses was done in the hope of setting them apart from registered and unregistered Shetland ponies. It was hoped that by doing so, there would be a higher demand for these little horses and also higher prices.

One myth that even found its way into Wikipedia is that of Miniature Horses having purposefully been bred by European Royalty throughout hundreds of years. It is said that they were the companions of small children and a breed separate of small Shetland ponies. Another myth is that miniature horses have been exclusively bred down from full-sized horses. The truth is that the American Miniature Horse has its roots mostly with the Shetland Pony.

The original Shetland Ponies are very sturdy animals with compact conformation and extreme hardiness. This enabled them to survive and even thrive in the harsh climate of the Shetland Isles, their native home for many years. They were used as small draft horses and children’s pets. This changed in 1847 when an Act of Parliament was passed preventing children from working in the coal mines. This created a big demand in small Shetland Ponies to be used as pit ponies.

By the 1960s many farms in the USA were specialized in breeding miniature sized Shetland Ponies. Herd records and pedigrees had not always been careful maintained. Some Miniature breeders greatly preferred the more interesting myths for marketing reasons. They chose to drop their recorded Shetland pony pedigrees. The big demand and high prices gave way to little regard for conformation and accuracy of pedigree. Early breeders not seldom encountered Dwarfism in their small horses. It became soon evident that a registry for Miniature Horses was needed.

In addition to the Miniature Horses already being bred in the US, many breeders were continuing importing small ponies from Argentina, England, Holland and Belgium. Due to lack of a registry documenting pedigrees, having a breed standard and shows with licensed judges, it became apparent that breeders were at a great disadvantage. In addition, buyers began demanding better documentation of their horse’s background.

The American Miniature Horse Registry (AMHR) was founded in 1971. It was agreed that it was owned and administrated by the ASPC. Miniature breeders were to have input through a committee. Only Miniature Horses of 34 Inches (86 cm) or less were approved of. The committee members changed the method of measurement to the last hairs of the mane. It was a compromise between measuring at the top of the withers and in the middle of the back. The 34 Inches were also a compromise. Initially it was being debated between 32 Inches (81 cm) and 36 Inches (91 cm). The first Standard of Perfection was written in 1974. In 1986 it was decided to expand the AMHR registry to include a division for horses up through 38 Inches (97 cm).

The registry was closed in 1994. Ever since, horses are required to have an AMHR registered sire and dam in order to obtain their AMHR certificate of registration. However it is possible to hardship ASPC or AMHA registered horses if they do not exceed 38 Inches in height.

The American Miniature Horse Association (AMHA) was founded in 1978. Among the founders was Leon B. Blair, who chaired the committee that wrote the Standard of Perfection for the AMHR. He also provided the initial funding for the new AMHA. The association adopted a Standard of Perfection largely based on the one being previously written for the AMHR.
The AMHA offered twice to buy the AMHR from the American Shetland pony Club – in 1979 and again in 1983 – but the offer was times rejected both times.

The AMHA officially closed their registry in 1987, however there is the option of hardshipping. Any horse meeting the requirements can be registered for a substantial fee. In order to being hardshipped, horses have to be officially measured by a regional director or at an AMHA approved show. They have to be in accordance to the AMHA Standard of Perfection and DNA is required.

The biggest difference between the American Miniature Horse and the American Shetland pony is the fact that – unlike the AMHR and AMHA – the ASPC is actually a breed registry. The studbook is closed and only ponies from ASPC registered parents can be registered as an American Shetland Pony. Both AMHR and AMHA are height registries, meaning the main determining factor is the height of the horse. Both registries do not have closed studbooks. They allow registration of horses from non-registered parents, albeit within certain limitations.

Especially in Germany many people are under the assumption that an American Miniature Horse is not taller than 34 inches and registered with the AMHA. German breeding associations established the AMHA as the studbook of origin. Their height limit is set at a maximum of 86 cm.

It is being completely ignored that the AMHR was founded years before the AMHA and should be the studbook of origin instead. Also ignored is the B-Division of the AMHR with horses measuring up to a maximum of 38 inches (97 cm).