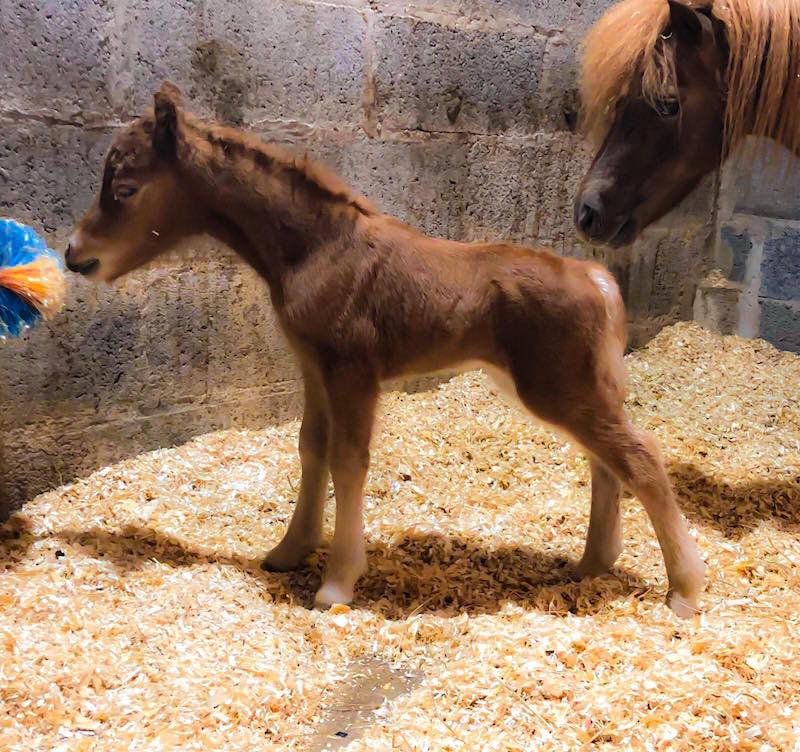 As always, we have been waiting eagerly for our foals this year to be born. “Kelly” (Aloha MRF Silent In Red) surprisingly went first even though she was not due until the middle of May. She gave birth to her filly almost three weeks earlier. As in 2019, the result is a miniature version of herself: a very pretty tiny chestnut filly, born on April 27 shortly before midnight. Like last year, the sire is “Oak Bay Mi Amigo“, one of the top producing stallions in Europe (and the USA before). This combination has proven itself again and appears to be the “Golden Cross”.

The little filly was named “DelSastre EBF Mi Oriana”. Oriana comes from Greek mythology and means sun dawn. Like her sister Princesa from 2019, Oriana is very small and expected to mature around 30 to 31 inches. In addition to a correct conformation she is extremely upright with the perfect show attitude – the ideal future show horse. If you are looking for a first-class miniature horse for shows and later for breeding, you have the perfect choice.
She is living in Northern France with Cédric Dubroecq, Elevage de la Buise.

The first foal of our beautiful American Shetland Pony mare “Gem” (Cross J Painted Gem) took its sweet time to make an appearance. After 3 weeks of sleepless nights and 352 days of gestation (who felt more like 837 days) Gem foaled a fantastic colt on April 29, shortly after 1 a.m. Admittedly the color was a bit of a surprise!. Nobody was expecting so much white since the sire “Cherryville Majic’s Dakota” is solid black.

We named him “DelSastre Dakota’s One In A Million” – stable name “Oscar”. He is stunningly beautiful, extremely elegant and refined with a beautiful dishy head like an Arabian horse. Gem is a fantastic mom and very proud of her first foal. Since we do not want to keep stallions here, Oscar will be for sale to the right home after weaning.